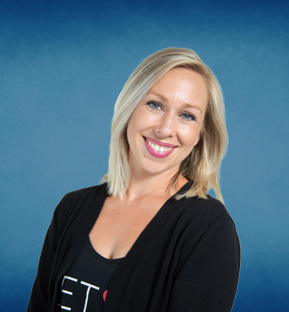 Born and raised in Huntington Beach, Calif., Bridgette received her early training at Huntington Academy of Dance under the direction of Marnell Himes and was a part of Ballet Etudes for eight years. She continued
her training at Southland Ballet Academy. She competed in and won the Orange County Star’s of Tomorrow competition at Segerstrom Center for the Arts in 2005 and 2006 and was a semi-finalist in 2005 and 2006 for the Spotlight competition held every year at the Dorothy Chandler Pavilion in Los Angeles. She went on to spend five years with Festival Ballet Theater, directed by Salwa Rizkalla, where she performed a wide range of soloist and principal roles in productions of Sleeping Beauty, Don Quixote, and
Swan Lake and worked with choreographers such as Jodi Gates, Shawn Stevenson, David Allen, Molly Lynch, and Edwaard Liang. Bridgette received the Carolyn Cunningham scholarship at Cal State University
Long Beach, where she received her B.A. in dance and performed works by Sophie Monat and Lorin Johnson. In 2009, she joined Monat Dance under the direction of Sophie Monat and performed principal roles at various galas such as the McCallum Theater’s Dance under the Stars Choreography Festival and Celebrate Dance in Los Angeles. She participated in the National Choreographer’s Initiative in 2012, directed by Molly Lynch where she performed works by Thang Dao and Darrell Grand Moultrie. She then
went on to join Smuin Ballet in San Francisco and performed works by Adam Hougland, Michael Smuin and Amy Seiwart. She took some time off to have her two beautiful babies and is now back teaching at
Huntington Academy of Dance, where she first fell in love with this art form and ultimately found her passion for dance. She is thrilled to be working with the next generation of HAD ballerinas and instilling her
knowledge and love of dance into each and every one of them!